Art Basel Through the Eyes of an Artist

“The gallerist followed me and bought the dress off my back”

Today marks the beginning of this year’s Art Basel Miami Beach, one of three Art Basel art fairs held annually (the original, in Basel, Switzerland, was in June; the Hong Kong edition was in March). Each one draws 70,000 to 100,000 artists, gallery owners, curators, collectors, and more, but to those outside of the art world, the event can be a mystery. To help offer a window into what, exactly, Art Basel is—at least how an artist experiences it—we enlisted the help of kHyal, a pop artist soon to be featured on my.meural. 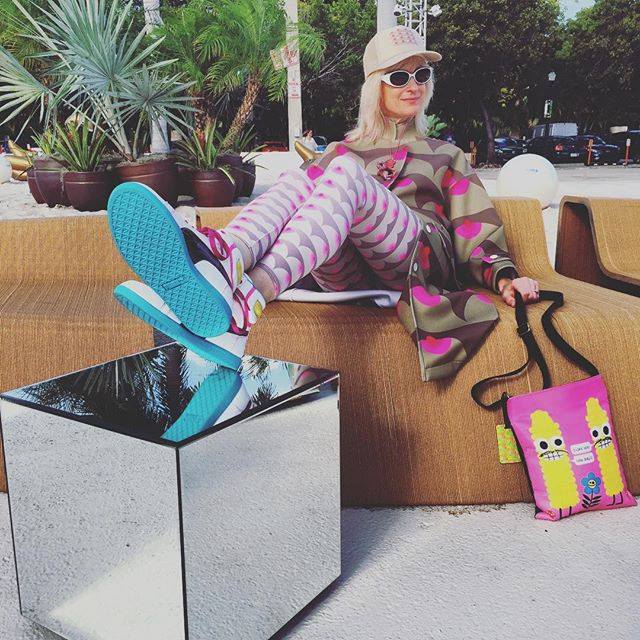 How would you describe Art Basel to those who’ve never been?

First of all, people confuse the name “Art Basel” and what it means. Art Basel is the original show in Switzerland founded in 1970. Art Basel Miami Beach began in 2002 and is one show that takes place at the South Beach Convention Center annually during the first week in December. 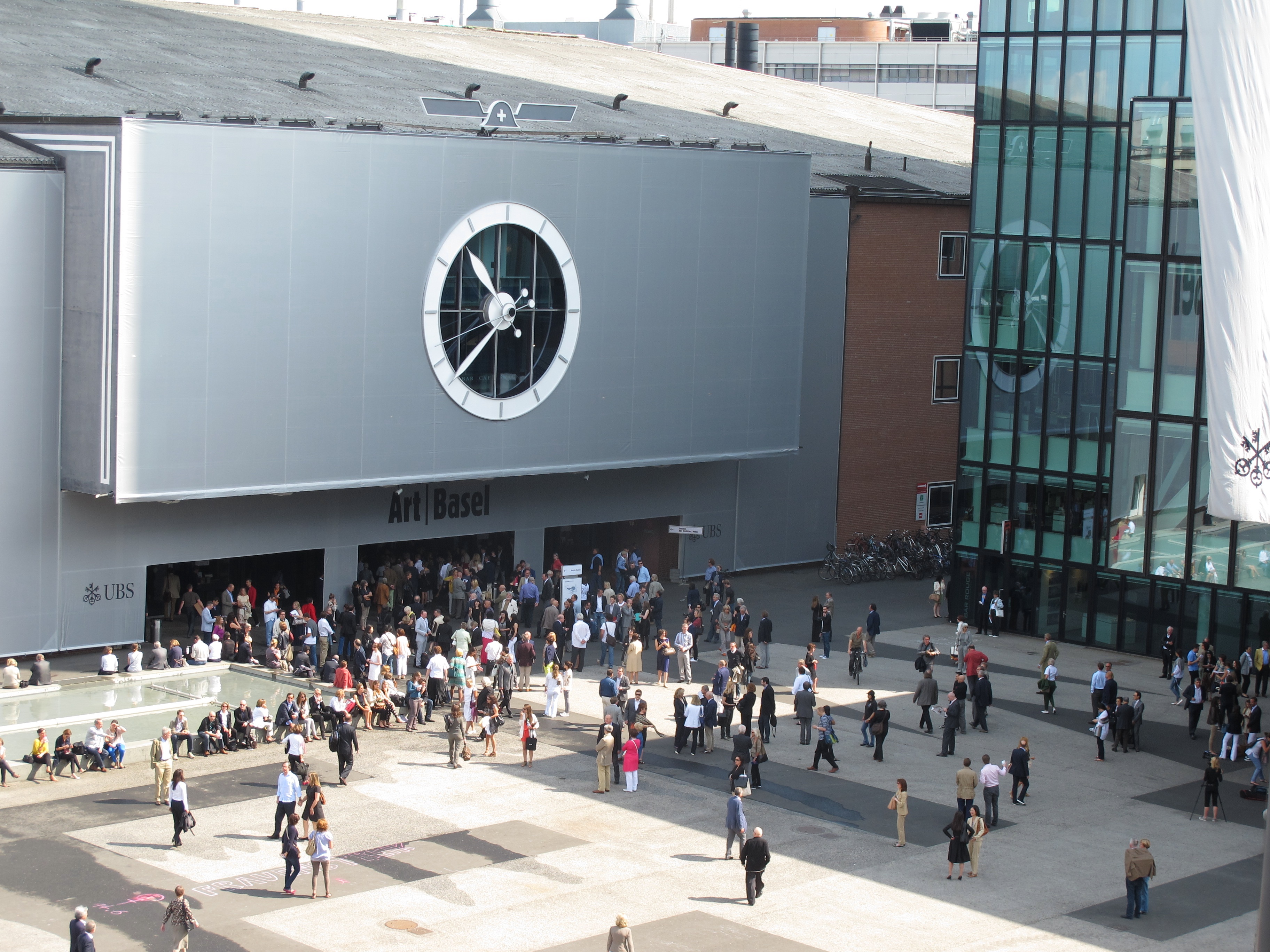 However, it has spawned an ever-growing explosion of art events throughout Miami and Miami Beach including over 20 ancillary art fairs and hundreds of events. It is the largest contemporary art event in the United States and now referred to as Miami Art Week as a whole. (Not to be confused with MiamiArtWeek.art.)

For how many years have you been attending? Has it always been as an artist, or sometimes as a spectator?

Ten years. I first attended as a spectator, just to check out what some artist friends had been involved in and the general scene. I would have gone in earlier years but I was adverse to spending time in Florida. During the last decade Miami has turned into a contemporary arts capital because of Art Basel Miami Beach and all it brought to the area, so now I enjoy going there.

Which locations have you been to?

If you are referring to “Art Basel” proper, I have been to Miami for the past ten years, and to Switzerland. I almost made it to the Hong Kong edition, but I was there at a different time, teaching.

If you mean what events do I attend at Miami Art Week, I have attended so many art fairs and events over the past ten years, some of which come and go, I can’t remember all of them, but I attend all the major previews and as many special events as possible, which take place in museums, parks, pop-up spaces, production studios, beaches, night clubs, and permanent private collection spaces. 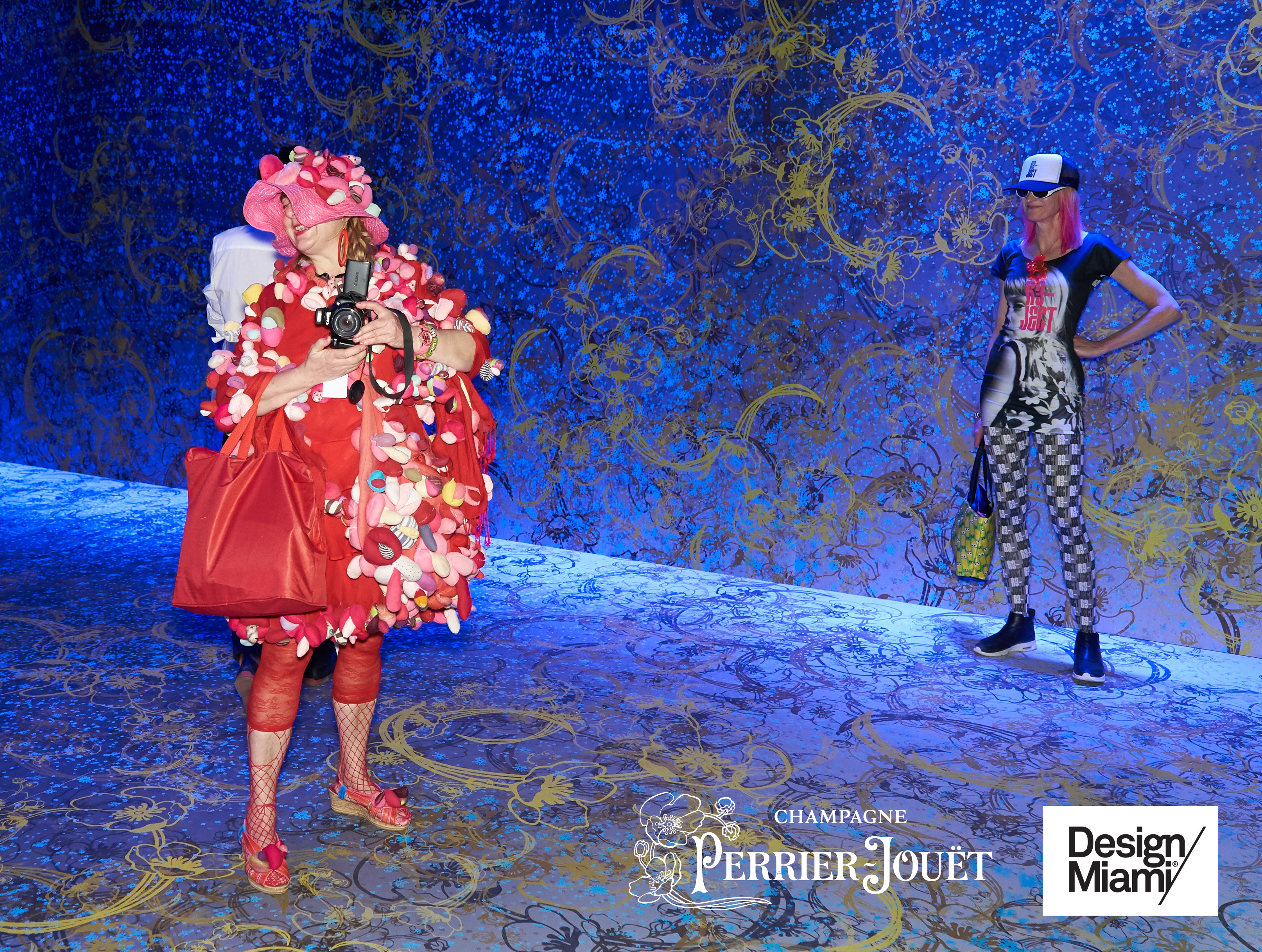 The artist at DesignMiami/ in 2017, © Perrier Jouet

What do you most look forward to each year?

I love the anticipation of seeing fresh work and the potential to see things executed and displayed in new and interesting ways, particularly pop-up spaces which can include performance, sculpture, interactive designs, and retail innovation. I also look forward to seeing other industry friends from around the world, artists, curators, designers, and gallerists I have gotten to know or work with over time.

I also dig the energy of Wynwood and the hard-driving street artists that work around the clock, sometimes for weeks, before the shows officially open. I particularly like it the week before things open to the public.

One of my favorite events in recent years is the Juxtapoz Clubhouse, which continues to grow. Last year, I was chosen to be part of Polaroid Originals project there, along with other artists, including Shepard Fairey.

And what do you least look forward to?

I least look forward to the mob scenes that swarm the events on the public days and how the city gets grid-locked because of it. The weekend of is a party scene, where the late-night streets are filled with the inebriated, which I avoid.

What was your all-time Art Basel highlight?

One of my personal highlights was when I was wearing one of my early paper dresses at an art fair preview, and as I walked out of Solange Guez Arte Contemporáneo’s booth, the gallerist followed me and bought the dress off my back. 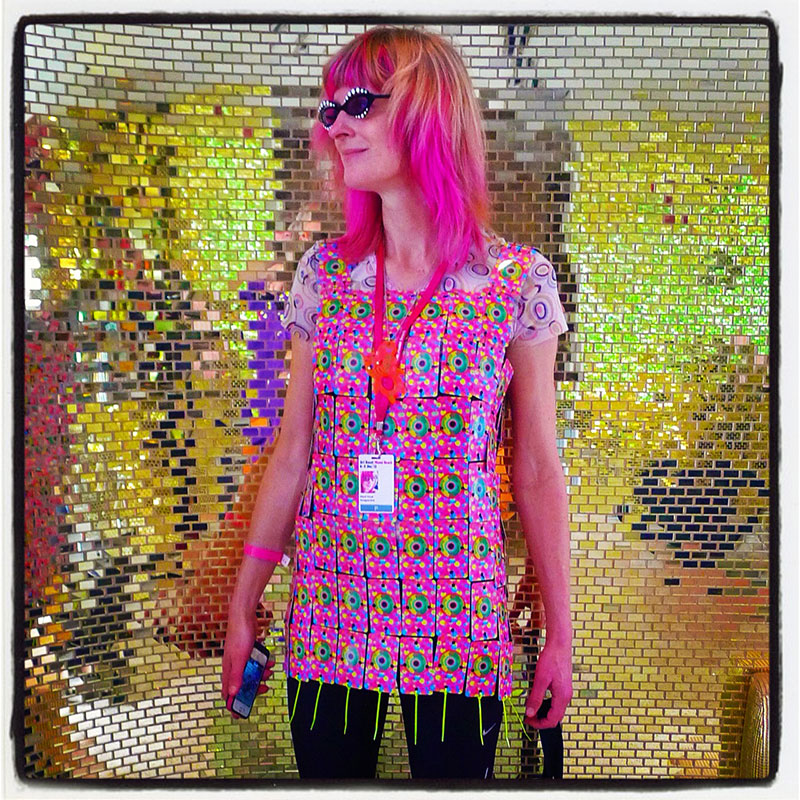 The dress in question; © Karl Heine

This not only resulted in the gallery representing me, but the following year featuring me as the only US artist at EGGO Arte, a 60-gallery conference and art fair in Buenos Aires. I was later commissioned as a designer to create the branding for their new entity, called Ojitos — Arte contemporáneo para niños, an organization that helps children learn about art, and how to start their first art collections. This was something I felt very closely aligned with and happy to be part of on the design development side, and as an artist whose work was also featured in gallery shows in the Buenos Aires gallery that houses it. 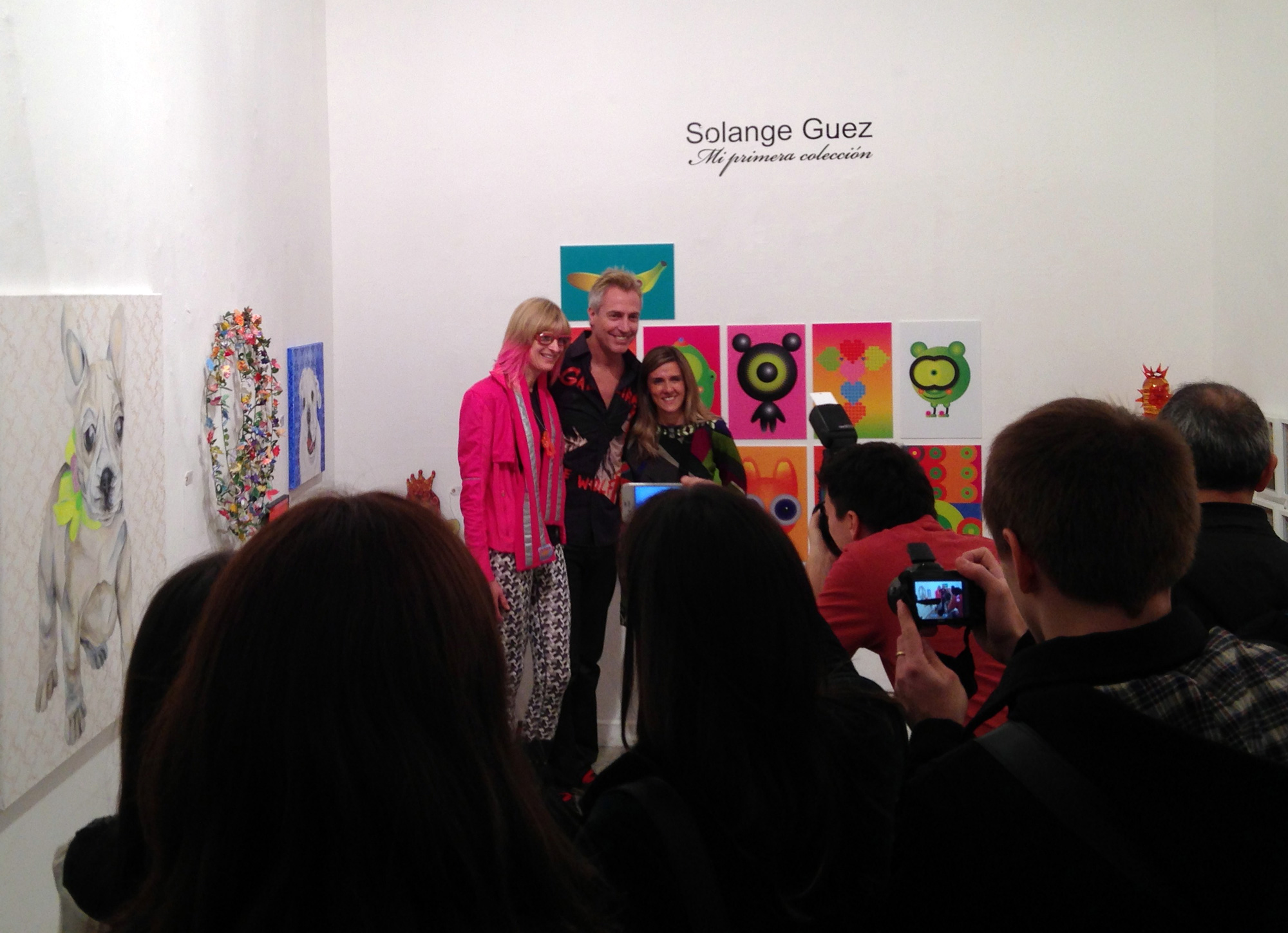 How would you describe an average day (if there is an average)?

In this case an average day could mean that I will be on the go to previews and events from morning until late at night, since there is so much going on. My mission during Miami Arts Week is triple-fold. I am there as a journalist for my arts publishing arm, SECTION, as an artist who launches new lines of wearable work each year at the previews under the name MegaGlam, and as a collector looking for fresh work from emerging artists. So, my plan of attack is always to attend as many of the VIP and press receptions as possible in order to converge with other professionals and collectors, and to leverage the networking opportunities that naturally occur in those ecosystems. It’s impossible to see it all.

Since I am pretty obsessed with work, anything social is a bonus. My interest is purely in being productive as an artist, writer, designer, and entrepreneurial thinker immersed in environments that challenge and surprise. My itinerary is fully mapped out in advance, but because I am working as a journalist while wearing my latest fashion-based art, the added benefit of the latter is that it often draws opportunities toward me. Other media professionals often interview and photograph me, galleries and collectors ask questions, so the interactive experience is a wonderful unknown, full of opportunities in a multitude of ways, and typically how I find new projects, by letting them find me. This methodology has resulted in international shows, new business opportunities, incredible friendships, and a growing art collection of work that fuels me with inspiration and wonder. 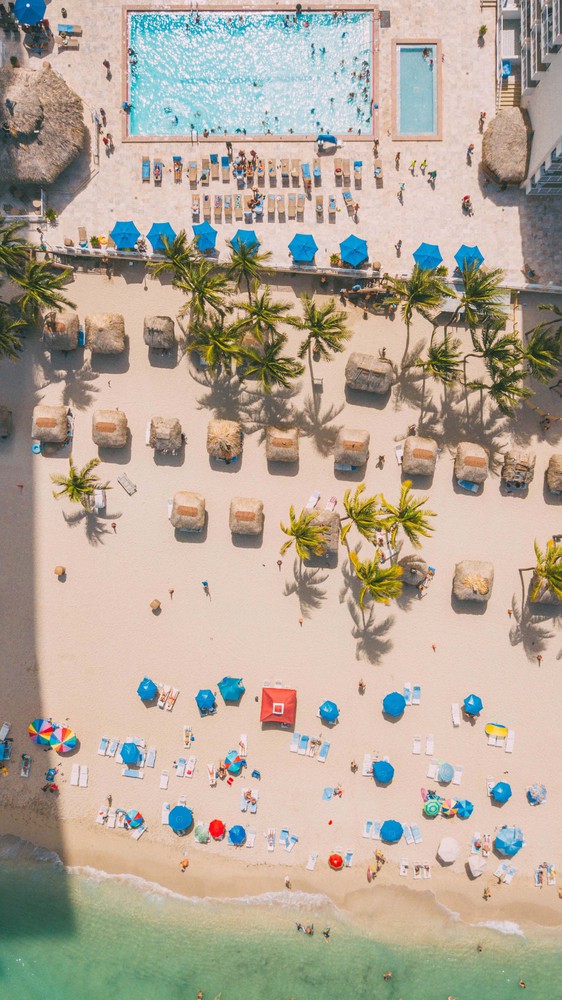 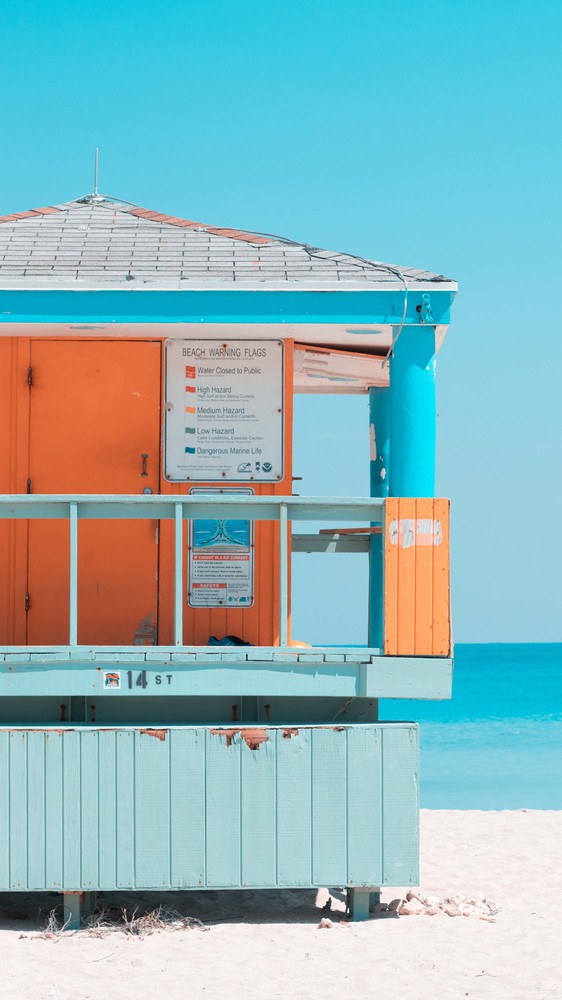 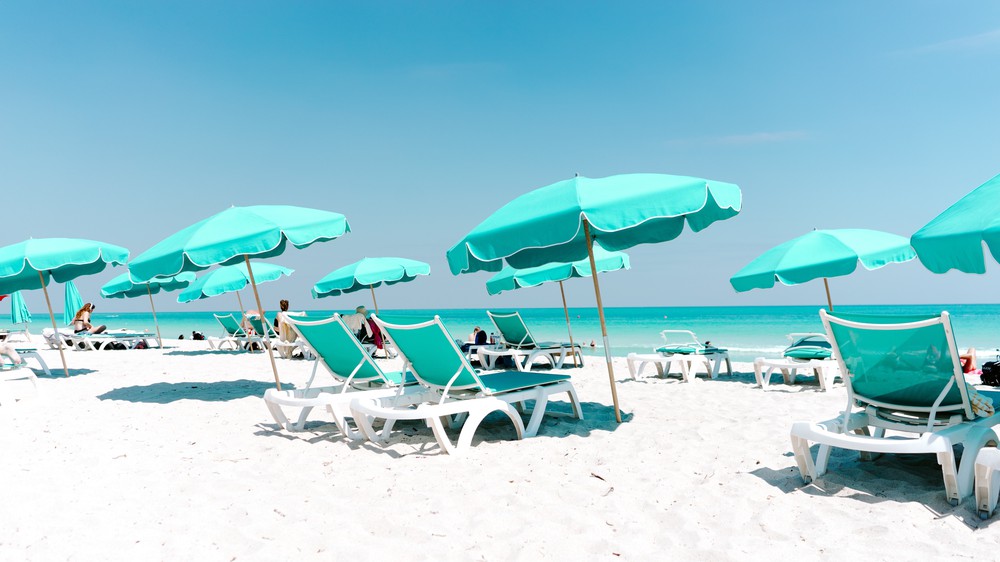